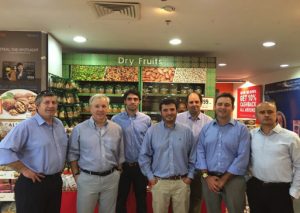 During the first week of December, the Chilean Walnut Commission went on a trade tour along with Pro Chile to build commercial ties and contacts in India. This major market was opened for Chilean walnuts in December, 2014. The trip was useful for getting to know the reality of the importers and distributers of this product in New Delhi and Mumbai. In addition, the updating of the protocol was confirmed with the sanitary authorities, allowing the use of phosphine as a pesticide for Chilean exporters. Chilean Walnut Commission Chairman, Andrés Rodríguez said that “in the short term, we confirmed the signing of a partial agreement for Chilean Walnuts that will allow them to enter the country with tax breaks”. Meetings and seminars were held in both aforementioned cities, along with visits to markets and distributers. ChWC member companies in attendance included Subsole Nuts, Natural Nuts, Growex, Valbifrut, PacificNut and Superfruit. “During the trip, we noticed great interest in Chilean walnuts from importers, wholesalers and supermarkets. One of the advantages of our product is that it reaches India during the offseason, enabling the consumption of Chilean walnuts during the country’s most important year-end festivities”, added Mr. Rodríguez.